This time last year I was waaaaay deep into a series of pilgrimages deep into dubstep, a process that is still ongoing, though not as spiritually all-encompassing as it was. And part of my response to the influx of dubstep vibrations that have been flowing into me since 2005 has been a re-connection with deep dub sounds of… Miles Davis. My connection with Miles has always crossed over with dub, electronics and industrial. I got heavily into Miles, especially the electric period but also the Gil Evans orchestral period, at the same time as I got into Cabaret Voltaire – when I was 13, almost 14. It was only a year or so later that I realised how much of an influence he was on Richard Kirk and Stephen Malinder; all I knew was that the sonics and spaces of 2 X 45 were identical to On the Corner. In the same way as the threads connecting from the Cabs to acid to ardkore and thence to dubstep are obvious, for me, the thematic connection from Miles to dubstep is also clear, but it’s more a matter of influence than direct connection.

So it was that when I was asked to do a solo outing in the brilliant Blogariddims series, I almost immediately decided to go on a voyage into Miles – in dub. I was going to include a lot of other fusion artists, but not much that I have in that genre really made the grade, so instead I threw in some of the soul and funk that influenced Miles in this period. And naturally, I used as my raw material much of Bill Laswell’s fabulous Panthalassa CD, which adds a layer of dub and re-edits to Miles’ originals. I simply re-edited and re-dubbed what Laswell did. All in all it’s an appropriate way for Blogariddims series to greet Beltane. I hope you enjoy it.

You can subscribe to Blogariddims, and download individual mixes, here: http://www.weareie.com/audio/blogariddims/Blogariddims.xml. This mix will be up for May 1st.

0:00 Miles Davis: Bitches Brew intro
This snippet is so recognisable – those sharp parps are the perfect signal to wake up for the mix. 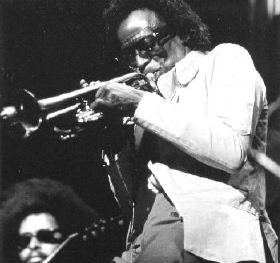 0:59: Miles Davis: Agharta Prelude Dub
Sheer, unadulterated, slow motion funk bliss. A dub of one of the tracks on Panthalassa, the original is from the Agharta album, which was recorded live at the Osaka Festival Hall in Japan on February 1, 1975. A lot of critics think is one of Davis‘ two greatest electric live records alongside Pangaea (which were both recorded the same day – Agharta in the afternoon and Pangaea in the evening). The band has its roots in the seminal group assembled for On the Corner. Saxophonist is Sonny Fortune, guitarists Pete Cosey (lead’n’headfuck feedback) and Reggie Lucas (rhythm), bassist Michael Henderson, drummer Al Foster, and percussionist James Mtume. Bill Laswell edited “Prelude,” down from over a half-hour and I took it down to five minutes so all you have here is pure funk jazz fire.

5:06: Miles Davis: Miles Runs the Voodoo Down (Edit)
Probably my favourite cut off Bitches Brew, this, at least it is now it’s had a bit of vigorous pruning. The album was recorded over three August days in 1869, right after the Woodstock Festival. Miles famously would assemble musicians at short notice, forcing them to think on their feet with minimal guidance – which must have been a total head-fuck. You can tell how the band are right on the edge of mapped territory on this tune, but they’re locked tight. It starts off all gorgeously loping, before slowly lifting off into heavy, fat jazz that almost has dubstep’s “wobble” in the low end. I took out a lot of the free jazz bleating in the middle and made sure there was plenty of Miles’ red hot but laid back groove, and even so we fit atonal jazz funk gold at around 10:39.

12:19: Parliament: Dr Funkenstein (Live) (edit)
God, I love Parliament. This is probably the best track off 1977’s Parliament Earth Tour album. It’s just a fat, minimal, drum and bass funk locked groove. The recording isn’t that hot but the playing is unbelievable so I slashed it down from its original 15 minutes and dubbed the fuck out of it. The end of it is very Apocalypse Now, the scene at the bridge as shards of Miles’ horn float through the wreckage of Parliament.

19:10: Miles Davis: What If
From one deep funk track to another, but dear god is this heavy. Previously unreleased track from Panthalassa, I edited it out of Laswell’s mix of Black satin/What if/Agharta prelude dub. It was called What If by Laswell because we was wondering, “what if this is Pete Cosey (on lead guitar?)”, but actually it’s Maclauglin. The real star is Michael Hendeson’s bass line, an awesomely solid, endlessly repeating syncopated figure that’s just irresistible. This one just rocks.

22:44: Curtis Mayfield: Stone Junkie (Live)
The marvellous Curtis in cheeky mood from this seminal soul live album, recorded at the Greenwich Village‘s Bitter End club on a freezing January ’71 night and released on the brilliant Curtis/Live! Album. Stone Junkie calms it down a bit from What If, but the chill factor is back with the FX. This is the sort of soul Miles was listening to pretty relentlessly throughout the seventies.

28:28: Miles Davis: Billy Preston
Another fantastic heavy funk work out, this is from the 1974 sessions that yielded the Get Up With It album. Most critics don’t seem to like this one but I love it, so much so I did a remix of it. This is just a dub of the original.

33:51: Headhunters: God Made Me Funky (Edit)
This is thee archetypal fusion track, here ripped to fuck. Herbie Hancock famously went looking for a bit of earth in 1973 and put together a funk band, The Headhunters. Yes it’s from the largest-selling jazz album of all time, but here’s it’s had the wanky sax solo ripped out, which makes the lush, faded out funk heaviosity that much more effective.

39:21: Miles Davis: Black Satin
From On The Corner – Kode 9’s favourite album of all time – and it’s a corker! Black Satin is built around a spanking hot cyclical break from Jack DeJohnette, with a set of discordant counter point tones bouncing around it and shimmering fuzz guitar drifting from the shadows.

43:14: Miles Davis: Bitches Brew (Edit)
This track is just mental. Absolutely dead serious, utter funk badness and jazz freakiness. This is just total, wailing madness which stays utterly the right side of formlessness, the energy surges and crackles and frankly it’s terrifying. The original edit loses its focus (sacrilegious though it is to say it) so I sharpened it up quite a lot by keeping the spotlight firmly on Miles – which doesn’t fit into the commonplace revisionism of praising the sidemen, but this is really about going with Davis into the nightmare. Across the chasm. 46:59: Miles Davis: In A Silent Way / Shhh Peaceful (Bill Laswell dub)
You simply don’t get any higher – or darker – than Bitches Brew, so it was time to let some light in with some lovely, twisted, sardonic chillage from 1969’s fantastic In A Silent Way album. If you’re reading this before downloading the mix and wondering if it’s all going to be a bit too much like onanistic jazz freakery, then fast forward to this bit cos it’s just lovely. Literally everyone in the country should own a copy of this album and we’d all be happier for it. And – despite the virtuosity on display throughout the rest of this mix, this is the one tune that absolutely anyone can learn to play on the guitar in half an hour. It’s that simple. But what Miles and his band do with it here is just priceless.

54:49: Curtis Mayfield: I Plan To Stay a Believer (Live)
Another one from Curtis / Live, and what a fantastic song this is. I won’t drizzle it with clichés (for once) but this simple, direct soul is the ideal partner for In A Silent Way, a similar cleanser.

57:30: Miles Davis: It’s About That Time
But Miles, even after his astonishing displays of malevolence throughout this mix, can out-do Mayfield when it comes to conveying purity and innocence, as he does on the very brief It’ About That Time.

That’s it. be interesting to see what Paul Nomos makes of this one!