I’m putting it up for solstice, this is great midsummer music.

It’ll be up on my increasingly active Soundcloud page as well soon. Should be going out as a podcast on iTunes too (if that’s working yet).

Rossi B and Luca: Nobody Knows. Heavy Artillery 2007 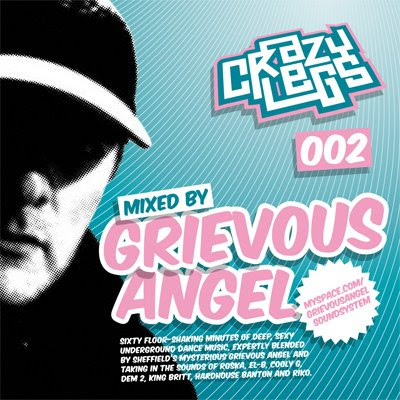 My contribution to excellent Bristol nightclub Crazy Leg’s terrific series of dj mixes is now up.

Get it here.
Note that the link has changed.

I went for garage, UK funky and proper house here. The mix is bouncy but fairly deep, goes just about as banging as you could possibly want UK funky to go, has some good vocal numbers, but has gobfulls of dub all over it. I was also excited to have some drops / shouts from our very own Rubi Dan, the brilliant Bok Bok, and best of all, COOLY G HERSELF!!!!! I nearly wet myself with excitement when I got them.

Big up Andy from Crazy legs who is a lovely bloke and a terrific promoter, I hope I get the chance to play there soon.

Technicals: this was an Ableton mix that I did 100% live, no edits, including the rewinds and FX. The drops / shouts got added afterwards along with a bit of polishing and mastering. This is basically what I sound like live, when I’m doing a funky set anyway.

Next up is probably a grime mix and, if I can finish it, Dubstep Sufferah 4…

Here’s the tracklisting… there’s a few tunes here you won’t hear anywhere else!

Me and John doing a 74 minute special for OUR FINAL EVER BLOGARIDDIMS. THERE WILL BE NO MORE FROM US! Unless someone drops out and droid needs someone to fill in rapidly. But yeah. Blogariddims is coming to an end and after a fair few bashes at the rss feeder, this is our last one.

You can also download the mp3 and all previous episodes (which you should do, definitely) direct fromhttp://feeds.feedburner.com/blogariddims/ or via itunes music store.

Direct link to the mp3

John has already posted a magnificent overview of this so I shan’t try and cover the temporal reality of the mix too much. So lets talk method first of all. John kicked it off with a rough live mix of everything he wanted in there. We cogitated on that, reflecting on what selections to make, and threw it away. He then did another recording session where he captured most of the tunes from the first mix, many of them in an unmixed fashion but with a load of mixing as well. I sifted through these CDs and stacked up the material in an iTunes playlist, made copious notes on what I wanted to do with them and what order to do them in, added a load more stuff to fit with what he’d done, and made a new final playlist. this left out a help of good stuff. I then dumped everything into Live, deleted most of his mixing (the mixes that made the grade were excellent though) and started looking at blends. That was when the magic started to happen – seeing how the material would form itself into something fresh. This was a pretty fast mix to do; I think I finished it in a month, even though there were some new techniques this time, like proper dj-style crossfder abuse within Live, as well as live sirens and FX. There’s a lot more performance in this one, which is a good thing, even though there’s a few sends that should’ve been edited out.

I love this whole intro section and though I say so myself, I’m delighted with how the Jammer loop combined with the Turbulence acapella. Having the Jammer radio excerpts really lifted the mix and I’m grateful to John for providing them. There’s a definite tip of the hat to Prancehall here too!

A heavily edited Richie Spice leads into Jammer riding Coki’s riddim – the only reference to dubstep on the whole mix, and of course it’s pretty grimey dubstep. A bit of a step back in energy from the loud arrivial, too.

Magnificent! Too many trendy white boys slag off Marley. Whatever the critique of Marley in JA as dancehall took over the lawns, it was a generally a critique founded in love for the man and his music, rather than a wish to appear more trendy than thou. This is of course a fantastic tune and I had to be physically restrained from including the live version from Babylon By Bus as well. I love the extra fx on this too. It merges perfectly into Mercston, whose version is appealingly pitched down. Nice flow into Skepta’s fine conscious grime tune.

Into a couple of tunes that really powerfully express the “grime as 21st century dancehall” thesis, a gloriously transcendent riddim that draws out all manner of lyrical invention. And then Maniac’s fantastic skanking riddim, exploited to the full by Slix. Marvellous

Jammer on his own, ancient take on foundational digi riddims – tempting to add more Sleng Teng from both dubstep and 80s Fast Chat, but John hates the Cotti version and we’ve done Fast Chat already, so we just rejoice in this awesome bit of radio that leads us perfectly into a couple of classic crossover bashment tracks, the first being the Joyride riddim. This is actually at 100 bpm, so rather than go all gabba om your ass there’s some tempo track editing here. It’s a banger isn’t it? The original set of sides went on rather long so there’s some vicious editing here. Naturally the women stomp all over the homophobic toss of the men. They’re John’s records so fuck it, I don’t care, I just cut ’em up.

And then the Pum Pum riddim. Doogz AND Harry Toddler AND Flow Dan on one riddim? That’s it. Game over. Grime IS bashment.

But Buss It Up is just something else. I rejigged the whole mix to make room for it. This utterly overwhelming slice of super-sophisticated grimey dancehall devastation is mind blowing. Totally amazing. Kano can release as many duff hiphop CDs as he wants as far as I’m concerned – this record truly is one of the great achievements of western civilisation. Love the loooooong mix from Pum Pum.

And after another nifty radio slot from Jammer, we’re into the glory that is the One In Ten riddim. When ub40 gets reversioned by other reggae acts, the (often all too real) quality in the original comes shining through. Loads of tweaky edits in the mix into Rossi B and Luca, which itself filters seamlessly into Ini Kimoze, and the scorched earth power of NASTY Crew. This is a “good bit”, my favourite part of the whole mix.

Anyway. Yes. Ice Rink. Only in dub. With fuckloads of sirens. And some hot cutting. Ain’t bad really is it?

And then to the iconic male star of reggae and his extremely wise decision to show off a gentler side in the most spare production imaginable. Dripping with raw emotion, it’s the perfect foil for Jammer’s nervous matey-ness, before Rhianna comes in to give them both a right kicking. Superb voice. And how tempted was I to download the funky house refix? Not enough to inflict it on John!

That’s it. Our last bloggariddims. End of an era really. Fab to do another mix with John. Thanks to droid for keeping it moving.