There seems to be a Basic Replay re-issue deluge happening at the moment and most of them are TOP so get on it. 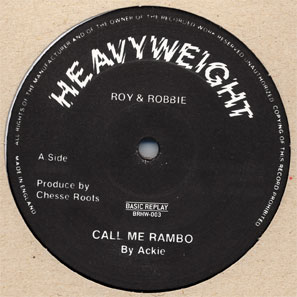 “This was recorded in 1986 and originally released on the Heavyweight label (an offshoot of the Heavyweight soundsystem, based in the Wood Green and Tottenham areas of north London), featuring Chester Roots at the controls and his nephew Ackie at the microphone; also the helicopter sounds free with a Commodore 64.” 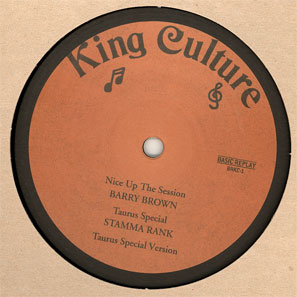 “Six murderous outings for Lloyd Robinson’s immortal rhythm on this showcase EP collecting singles produced by King Culture in Toronto and Kingston, Jamaica, during 1980-81.
Rod Taylor was voiced in JA; Barry Brown between both cities. Stamma was mic man for the JA sound Taurus: this was his recording debut. Mixing was done at Tubby’s, assisted by his apprentices Professor and Puggy (an expert with the Delta 4 machine tape-delay).
These versions tore up dancehalls at the time. Listen to Gemini at Skateland, with Welton Irie, Plough, Ringo and full crew, all riding dubs [If anyone knows where I can get this, let me know! – p.m].